Bruno Donat, Chief of the Geneva office of the United Nations Mine Action Service, shares how to adapt in crises, from disarming combatants to fighting racism in the UN.
Kayla Kim
Marketing Manager, Laidlaw Foundation
Follow
Like

Join us for another episode of the Extraordinary Leaders series on Monday, August 8th, 3pm BST!

Imagine that your job is to remove weapons from the hands of combatants. You are in a room with the leader of one of these armed groups, and you must convince them to disband the group and disarm its members. What do you do?

Join us on Monday, August 8th, at 3pm BST to discuss how to adapt to difficult circumstances and enact change with Bruno Donat. Mr. Donat encountered situations like these while leading Disarmament, Demobilisation, and Reintegration (DDR) of armed groups in the Democratic Republic of the Congo for the United Nations. Today, he protects civilians from the threat of landmines and explosive ordnance by running humanitarian coordination and advocacy as Chief of the Geneva office of the United Nations Mine Action Service.

Though many of us may never disarm combatants or advocate to clear landmines, we often encounter challenges with no clear solution. Join us to discover:

With more than 20 years in international affairs, Mr. Bruno Donat is the Chief of the Geneva office of the United Nations Mine Action Service (UNMAS), the component within the Department of Peace Operations which works to eliminate the threat posed by landmines, explosive remnants of war, and improvised explosive devices. Just before this posting, Mr. Donat was the Chief of the Section of the United Nations Organization Stabilization Mission in the Democratic Republic of the Congo (MONUSCO) working on Disarmament, Demobilization and Reintegration (DDR) – of armed groups - and Community Violence Reduction. He was also previously the Team Leader for Political Affairs at the United Nations Mission for West Africa and the Sahel (UNOWAS) covering some 16 countries of the region. Earlier postings include Headquarters and country-level roles for both the United Nations and the World Bank, the last years of which he served in the Fragile States, Conflict, and Social Development unit of the World Bank’s Africa Region.

Kayla was a Laidlaw Scholar in 2019, researching national, regional, and local identity in northern Tajikistan through the lens of women's fashion. After graduating from the University of Oxford in 2020, she worked in the Geneva office of the United Nations Mine Action Service (UNMAS) as a Communications Coordinator. She now manages marketing for the Laidlaw Foundation. 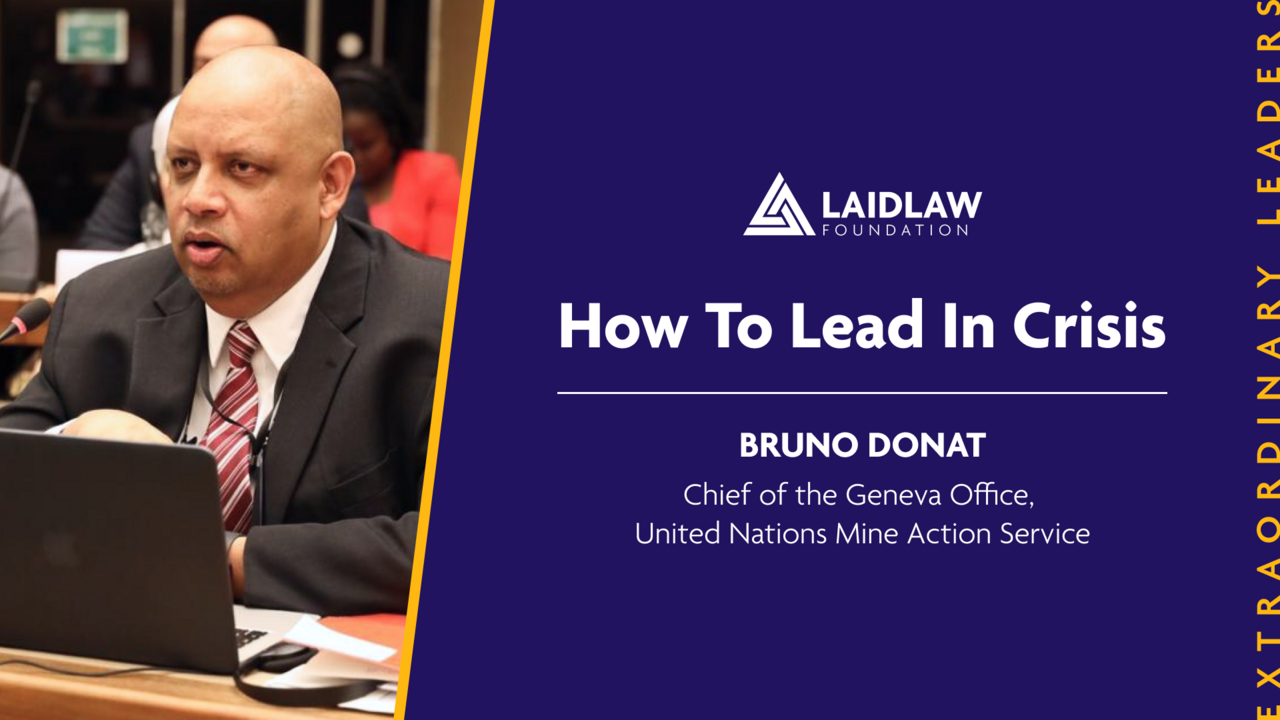 Bruno Donat, Chief of the Geneva office of the United Nations Mine Action Service, shares how to adapt in crises, from disarming combatants to fighting racism in the UN.