Alejandra Díaz-Pizarro, a Columbia University Laidlaw Scholar, on the struggle of indigenous communities to manage their land in Mexico, looking at the wider perspective and taking inspiration from disciplines other than her own.

Over the last 30 years, economic scholarship on collective resource management has shifted away from merely accepting the “tragedy of the commons” and proposing privatization or centralization as the only two solutions. The seminal work on this subject, Elinor Ostrom’s Governing the Commons (1990), outlined eight principles that all successful commons follow; since then, many theorists have elaborated upon or modified these principles to better fit emerging contexts. These theories remark on the importance of personal connections between group members and with the land; however, little is said specifically about the groups that (perhaps best) fit these crucial criteria: indigenous communities.

Departing from the case study of Cuetzalan, Mexico, my research seeks to find connections between Ostrom’s principles and those of indigenous governance. As a whole, my project focuses on indigenous approaches to land administration and what they can teach us about resource management. My (admittedly ambitious) objective is to afford legitimacy to traditional land management, which in Mexico so often is either neglected or dismissed as “ways of the folk” or as an anthropological curiosity, framing it as economically viable rather than accepting its outright dismissal.

Altogether, my research stands at the crossroads of three key issues: the urgent need to find sustainable alternatives to current land management practices; the social push to restitute indigenous autonomy beyond purely nominal land acknowledgments; and the lack of specificity and vision in the Mexican government’s recently-adopted policy language of “traditional knowledge” and “originary peoples.” Though the last issue is unique to my country, the first two belong to larger global trends, and as ecological destruction and institutional destitution threaten us all, I hope that my research can provide at least one example of how we can fight them.

In February 2020, I visited the small mountain town of Cuetzalan, in central Mexico, as part of an IB science trip. Cuetzalan has long been wrapped in disputes between indigenous Nahua and Totonac groups, who collectively manage waterfalls and coffee plantations along the mountain chain, and national hydroelectric and telephone companies, which have long sought to purchase this land to "make it more productive." Though that hadn't been the purpose of the trip, I returned intrigued as to how Cuetzalan manages to not only endure but persevere in the face of Mexico's ill-applied "progress" programs and determined to learn more.

But the root of my interest lies in history. Mexico has over 68 distinct indigenous peoples, and the issue of the fair distribution of land has been at the heart of every major revolution in the country. However, our current president backs projects that actively harm indigenous land and natural ecosystems despite being a self-proclaimed leftist. I'm interested in the confluence between historical and economic currents, especially when they produce paradoxical scenarios such as this one—and thus the time to revisit Cuetzalan, where my interest lay along the same lines, seemed right.

Our weekly lunches with professors! Every Friday, the Laidlaw cohort would convene for lunch with a Columbia professor, a chance to hear about their work and trajectory and ask them questions about it.  I heard from Professor Andrew Nathan, who has been in (and shaped) the field of Chinese foreign policy since Maoist China, and Dean Josef Sorett, who told us about his road through college basketball in Middle America to religious studies to being dean of Columbia College, and Professor John McWhorter, who gave us all a fascinating crash course in linguistics and on what it takes to be a NYT columnist.

College opens you to a broad range of academic experiences, but you run the risk of being confined to those in or adjacent to your major; the chance to hear about disciplines you know very little about from those most passionate about them is enough to ignite a love of learning in anyone. It certainly did for me, and along with that, it gave me a new perspective on what leadership looks like in an academic context.

My biggest challenge so far has been shifting out of the productivity, results-focused mindset. The deeper I got into the literature review for my project (which encompassed land reform history, indigenous governance theory, and collective resource management theory), the more I realized there was no way I would be able to get through all of it in the six short weeks I was at Columbia, let alone come up with a paper.  I've had to learn to think in terms of wider timelines: I'll be continuing my work throughout this semester, with the aid of my mentor, Prof. Caterina Pizzigoni, who was the one to encourage me to give every piece of my research its due time. The short timelines of most college classes, with clear-cut due dates and short-term projects, have prepared me well for this type of work, but my research this summer has shown me the value (and the demands) of longer-term undertakings.

We've all heard the phrase "the ivory tower" be used in disapproval of academia, and its perceived tendency to delve into increasingly complicated microspecifications that never go past theory. To me, being a Laidlaw scholar is all about countering that perception. Beyond the research, I was attracted to the Laidlaw program due to its dual focus on creating agents of positive change in the world, and on giving them the necessary leadership skills to do so. As I see it, a Laidlaw scholar is keenly aware of the practical implications of their research, and in fact, carries out that research throughout keeping its real-world applications in mind. It is this idea, of not only researching but researching with an eye for impact, that to me defines a Laidlaw scholar.

I never cease to be inspired by a certain cohort of female Mexican journalists: women like Anabel Hernández, Lydia Cacho, Peniley Ramírez, and countless others have faced threats and even physical harm for thoroughly exposing circles of power in drug trafficking, sex trafficking, and governmental and corporative corruption. Being a female journalist is doubly dangerous in Mexico: first, because Mexico consistently ranks among the top worst countries to be a journalist in; second, because femicides in Mexico have steadily climbed in the last few years, and impunity for femicides has not decreased. I consider these women leaders because they are among some of the most recognized names in Mexican journalism (note: not merely female journalism, but national journalism as a whole), but because they are public figures who are constantly open about the difficulties they face despite the danger that disclosure puts them in, from delinquents and government officials alike. I can't help but admire their commitment to the truth and their sheer bravery in the face of what it means to be a woman, and a journalist, in a country notoriously dangerous for both groups.

Any ideal future for me necessarily includes environmental efficiency. I hope to see, us move past fossil fuel lobbying and invest in solar/renewable energies at a large scale, abandoning policies like carbon taxes—which almost always tend to disproportionately affect the sector of the population that can least afford to pay them—in favor of progressive, eco-focused policy. Climate justice is a necessary component of inequality, so I'd like to see a world that isn't divided into those whose money inoculates them from climate consequences and those who pay the price despite dealing with none of the large-scale harm. I'd like to see corporations' environmental damage more strictly regulated—and I don't mean "paying a fine if you overpollute," but enacting policy that actively prevents pollution in the first place. In my ideal future (which, if it will come, must do so urgently), climate policy is preventative, not reparative, and we're all on the same page about what that means.

📚 My top book recommendation: The Plague by Albert Camus

🎵 My current anthems: When You Were Mine by Prince and Strange Powers by The Magnetic Fields

🌈 Something that made me feel joy recently: Spending time with my family! In Mexico, meals extend way after all the food is finished, something called the sobremesa. Sobremesas are generally rife with good coffee, good conversation, and good company, all things I miss the most while I’m away.

You can find Alejandra on LinkedIn. If you are interested in learning more about her work on the struggle of indigenous communities to manage their land in Mexico you can have a look at her 2022 summer video.

Alejandra is a Laidlaw Undergraduate Leadership and Research Scholar at Columbia University. Become a Laidlaw Scholar to conduct a research project of your choice, develop your leadership skills, and join a global community of changemakers from world-leading universities. 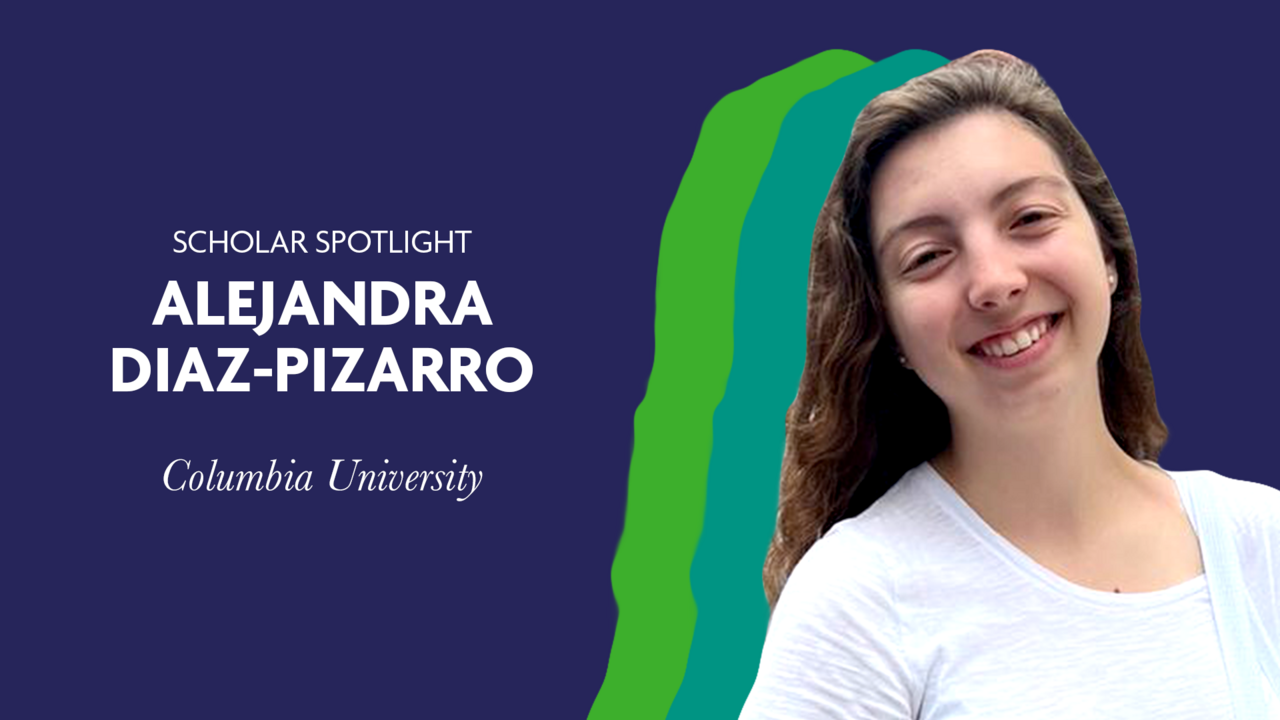 Laidlaw Scholar Alejandra Díaz-Pizarro on the struggle of indigenous communities to manage their land in Mexico, looking at the wider perspecive and taking inspiration from disciplines other than her own.