We shut down the Laidlaw Scholars public page and closed the group on Facebook on September 30th 2019 - here is why.
Susanna Kempe
CEO, Laidlaw Foundation
Follow
Like Liked by Nikol Chen and 4 others

Facebook’s response to the Cambridge Analytica data misuse, the Russian interference in multiple elections and the fake reviews is at best complacent and, at worst, suggests it is complicit. Neither of these are acceptable. We are proponents of moral leadership. Facebook has failed to demonstrate this repeatedly.

Facebook only survives because it has users whose profiles it can sell. Enabling them to profit while showing such a lack of moral leadership no longer seems like a fair exchange for seeing our scholars’ news and keeping you up to date with ours.

We would urge you to consider doing the same #deleteFacebook. If you choose to be the product that Facebook sells, then you might want to commit two things:

1. Check the source and accuracy of “news” before you believe it / share it

2. Believe Dean Valentini who says that if you are communicating on social media remotely like you would at a toll booth / on a highway, you need to re-think your approach and impact.

In summer 2019 we launched a brand new community platform - the Laidlaw Scholars Network - to give Laidlaw Scholars and alumni an alternative social media space. Here you can meet ambitious peers, participate in leadership in-action initiatives and collaborate on research projects for a better present while secure in the knowledge that we are a charity and will never, ever, share your data with suppliers, advertisers or anyone else for that matter. We encourage you to use the Network instead of Facebook to communicate with others, publish your research, and further your careers.

See you on Twitter, LinkedIn, email or better still on the Laidlaw Scholars Network.

A graduate of Cambridge University, Susanna’s professional experience includes over 15 years in senior leadership roles in international B2B and learning businesses. Susanna began her career at the Institute for International Research (IIR) where she first worked with Lord Laidlaw, rising to Chief Marketing Officer (CMO). When IIR, which was the world’s largest organiser of commercial conferences, was acquired by Informa plc in 2005 Susanna was appointed CMO of the enlarged group and also led the public company’s investor relations programmes. She subsequently joined Emap Ltd as Chief Marketing & Strategy Officer and CEO of Emap Networks, that group’s conferences business. Later she became CEO of the fashion industry forecaster WGSN and was latterly Group Content and Marketing Partner of the leading strategy consultancy Brunswick Group. A German-American raised and educated in the UK and a committed internationalist, Susanna has been involved in globally trading businesses throughout her career, directing activity in the Americas, across continental Europe, and the Asia Pacific. Susanna has been extensively involved with education and professional development over many years. She was Head of Group Training and led the commercial acquisition and integration of a portfolio of corporate training businesses whilst at IIR; and created learning academies at both Informa and Emap. She believes experiencing and appreciating different cultures promotes better global understanding, creativity and leadership. She is passionate about the power of education to transform lives; and believes that we need to develop a new generation of diverse leaders who are curious, bold and devoted to decency, truthfulness, and innovation. Susanna is committed to diversity not only as a societal imperative but as a critical component of commercial success. As an advisor to the trustees of the Foundation, Susanna first learnt about its purpose and programmes before becoming its Chief Executive responsible for the Laidlaw Schools Trust, the Laidlaw Scholars and its other education programmes. Susanna read English and Philosophy at Newnham College, University of Cambridge. She has five half blues in swimming and water polo; and played netball and rowed for Newnham.

We reflect a lot on the motto that Emmeline Pankhurst coined: Deeds Not Words. Deleting our Facebook accounts was one of those deeds. Now, Lord Laidlaw has divested all of his Meta (Facebook's rebrand) holdings #ethicalleadership.

How Do We Close the Disadvantage Gap? 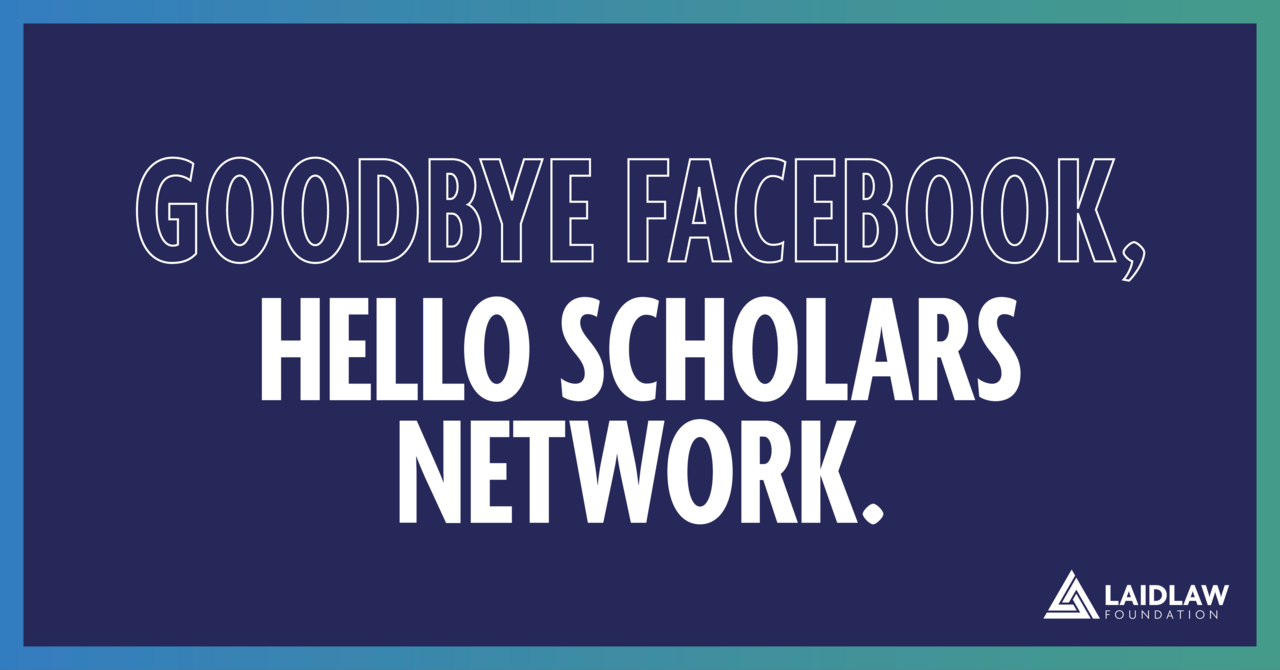 We shut down the Laidlaw Scholars public page and closed the group on Facebook on September 30th 2019 - here is why.