Get People to Follow You to the Ends of the Earth

Leadership is hard to define and good leadership even harder. But if you can get people to follow you to the ends of the earth, you are a great leader.

Indra Nooyi (1955-) is a former Chair and Chief Executive Officer of PepsiCo. During her time at PepsiCo, she pushed toward healthier offerings, aiming to cut sugar, salt and fat from many Pepsi products by 2025.

In 2018, Nooyi was named one of the Best CEOs In The World by the CEOWORLD magazine. Forbes magazine ranked Nooyi on their lists of The World's 100 Most Powerful Women from 2008 to 2017, with the highest rank of number 2 in 2014. Fortune magazine has named Nooyi number one on its annual ranking of Most Powerful Women in business for 2006, 2007, 2008, 2009 and 2010.  In 2008, Nooyi was named one of America's Best Leaders by U.S. News & World Report. In 2008, she was elected to the Fellowship of the American Academy of Arts and Sciences. In 2013, Nooyi was named one of the "25 Greatest Global Living Legends" by NDTV. On 14 December 2013, she was awarded by the President of India Pranab Mukherjee at the Rashtrapati Bhavan.

Khushi Kakrania, Laidlaw Scholar at UCL, named Nooyi as one of her most inspiring leaders in last week's Scholar Spotlight: "When PepsiCo was heavily criticised for promoting obesity, Indra Nooyi, its former CEO, turned adversity into opportunity by introducing healthier and more sustainable options. Profit-making companies should lead by this example that it is truly possible to rise by lifting others. It starts by taking responsibility for their negative actions and recognising that businesses are a part of something larger than themselves." 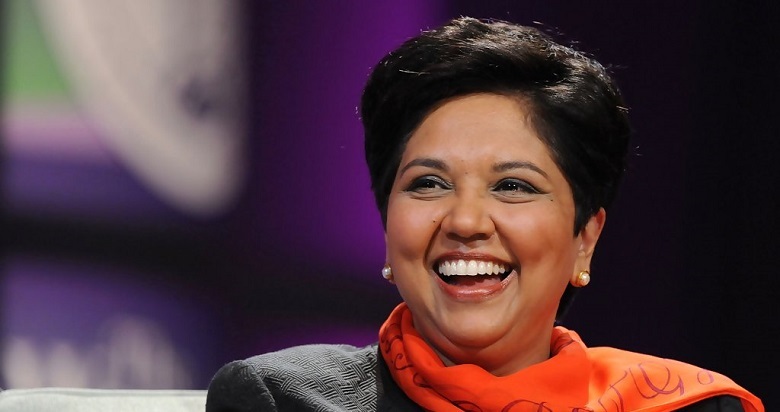 Get People to Follow You to the Ends of the Earth