I am in the early stages of a career in the Film & Television industry.
I am currently studying Film & Television Production BSc (Hons) at the University of York.
I have always had a passion for everything Film & Television, it has long been my dream to enter this industry.
I have directed and been involved in numerous professional-standard short films.
My productions can be viewed on my OTHstudios YouTube channel, which holds hundreds of subscribers and thousands of views.
I recently completed my A-Level study at York College with Film Studies, Media Studies, Business Studies, Drama and the Extended Project Qualification receiving A*, A*, A, A, B.
I enjoy fast-paced professional environments, and look forward to developing my skills as much as possible in the future.

My research project, ‘to what extent has the Film & TV industry commercialised LGBT+ representation into brand image and marketing?’ 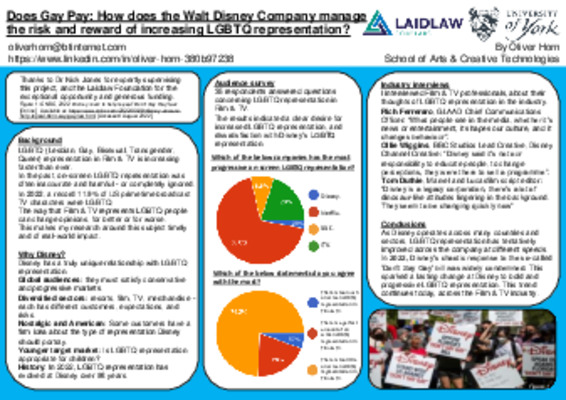 Research Poster - 'Does Gay Pay: How does the Walt Disney Company manage the risk and reward of increasing LGBTQ representation?'

You Are Never Too Small
Leadership, Leadership Quote of the Week

POSTER: The Untapped Potential of Human Language: Investigating the Perception of Typologically Unattested and Rare Consonants