WEBINAR: How To Be A Moral Leader - Join the Revolution. Acumen's Jacqueline Novogratz in Conversation with Susanna V. Kempe

A conversation between best-selling author and Acumen Founder & CEO, Jacqueline Novogratz, and Laidlaw Foundation CEO, Susanna V. Kempe, about how to become a moral leader in a world that desperately needs a new model of leadership. 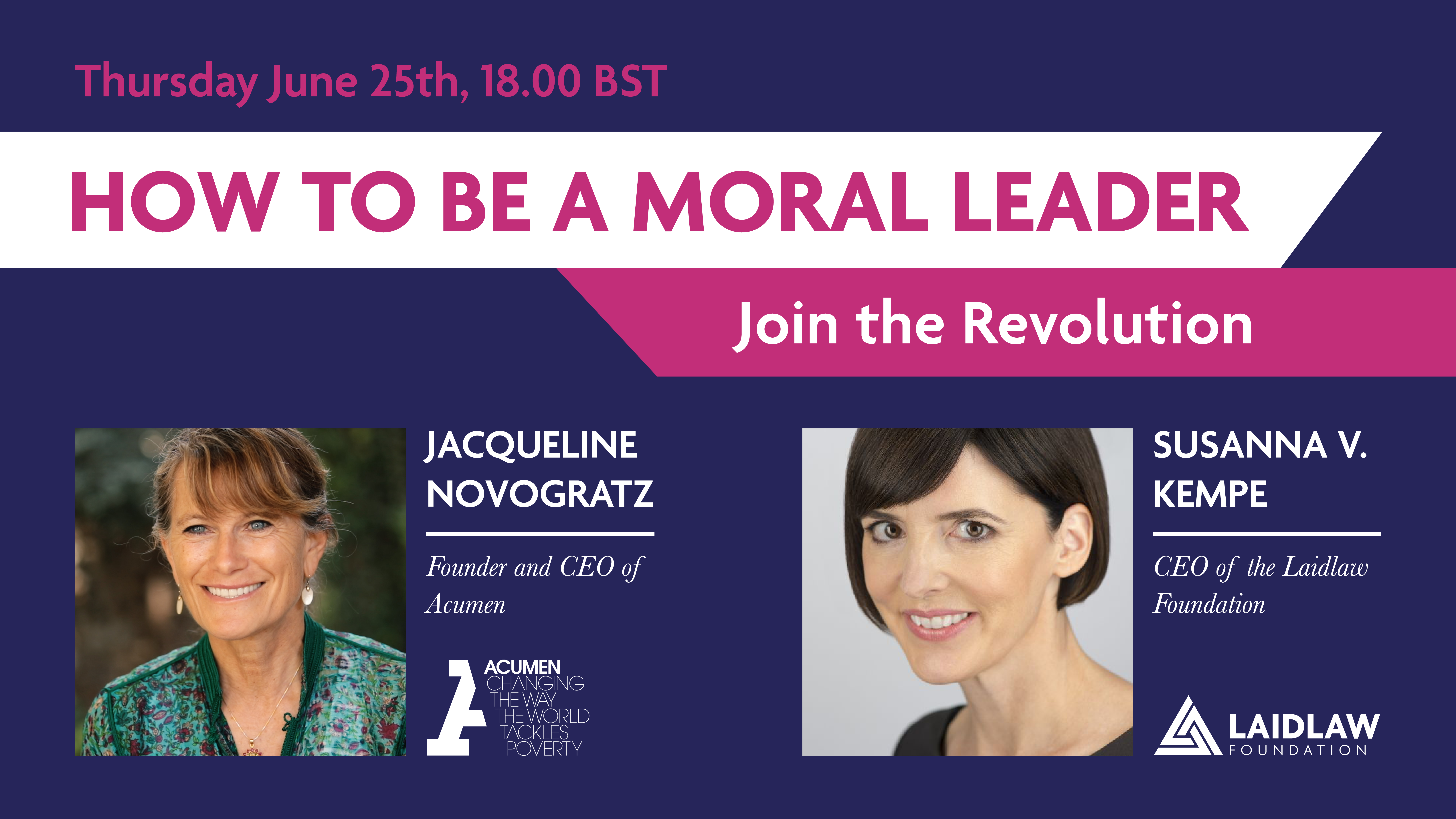 Join us for a conversation on the Moral Revolution.

Best-selling author and Acumen Founder & CEO, Jacqueline Novogratz, and Laidlaw Foundation CEO, Susanna V. Kempe, discuss how to become a moral leader in a world that desperately needs a new model of leadership: one that asks leaders to move from a system that puts profit at the centre to one that insists on prioritizing humanity and the Earth instead.

“Our fragile, unequal, divided, yet still beautiful, world deserves a radical moral rejuvenation," - Jacqueline Novogratz, in her latest book, Manifesto for a Moral Revolution: Practices to Build a Better World.

Susanna and Jacqueline will explore what it takes to set off on a path of moral leadership and solve the world’s problems, big and small. In the session, you will learn:

We are also giving away five free copies of Jacqueline’s new book, Manifesto for a Moral Revolution: Practices to Build a Better World. Enter the raffle at registration.

Manifesto for a Moral Revolution: Practices to Build a Better World, a new book by Acumen Founder & CEO and best-selling author Jacqueline Novogratz, reveals what it takes to create change. Drawing on practices of moral leadership, the book addresses the most common hurdles faced by those who want to do good and shares ideas anyone can use to move through challenges successfully.

In the book, Novogratz draws on unforgettable stories from changemakers around the world and wrestles with complex ethical and moral quandaries. Tackling issues ranging from identity and measuring what matters to whether markets will support businesses that reject a profit-alone mentality, Novogratz is a testament to the value of embracing discomfort and holding steadfast to principles. In these pages, she shows how today’s leaders, who often kick off their enterprises with grand ambitions and tight timetables, might navigate the historically challenging obstacles which have stymied prior generations of investors. And for all who feel fearful in the face of our unique, pressing issues, she offers something more: hope.

Manifesto for a Moral Revolution is currently available for purchase wherever books are sold in the United States. Outside of the United States, please check your local booksellers for availability. To learn more about the book, upcoming events, and Acumen’s online course that accompanies the book, as well as to sign up for Acumen’s newsletter, please visit acumen.org/moralrevolution.

About the Author, Jacqueline Novogratz

Jacqueline Novogratz is the New York Times best-selling author of The Blue Sweater. Her second book Manifesto for a Moral Revolution: Practices to Build a Better World was published in May 2020.

In 2001, Jacqueline founded Acumen with the idea of investing philanthropic patient capital in entrepreneurs seeking to solve the toughest issues of poverty. As a pioneer of impact investing, Acumen and its investments have brought critical services like healthcare, education and clean energy to hundreds of millions of low-income people. After supporting hundreds of entrepreneurs, Jacqueline and her team recognized character as the crucial ingredient for success; in 2020, they launched Acumen Academy to instruct others in global social change.

Under Jacqueline’s leadership, Acumen also has launched several for-profit impact funds designed to invest at the intersection of poverty and climate change, and has spun off 60 Decibels, founded on the principle that serving all stakeholders is as important as enriching shareholders.

Jacqueline has been named one of the Top 100 Global Thinkers by Foreign Policy, one of the 25 Smartest People of the Decade by the Daily Beast, and one of the world’s 100 Greatest Living Business Minds by Forbes, which also honored her with the Forbes 400 Lifetime Achievement Award for Social Entrepreneurship. In addition to her work with Acumen, she is a sought-after speaker and sits on a number of philanthropic boards. She lives in New York City with her husband.

Acumen is changing the way the world tackles poverty by investing in companies, leaders and ideas. We invest patient capital in businesses whose products and services are enabling the poor to transform their lives. Founded by Jacqueline Novogratz in 2001, Acumen has invested more than $128 million in 128 companies across Africa, Latin America, South Asia and the United States. We are also developing a global community of emerging leaders with the knowledge, skills and determination to create a more inclusive world. In 2015, Acumen was named one of Fast Company’s Top 10 Most Innovative Not-for- Profit Companies. Learn more at www.acumen.org.

+2
Nikol Chen (she/her) and 2 others
There is Always Light, if Only We’re Brave Enough to See It
Leadership, Leadership Quote of the Week

Tom Burdge
Laidlaw Scholars Network
We use cookies to help improve your experience. By continuing to browse our website you are consenting to our use of cookies.
Learn more