"Bacterial Growth and Survival Under Mars Simulation in High Perchlorate Conditions."
Nikol Chen and Bijan Harandi
2 contributors
Like Liked by Capone and 1 other
0

Bijan Harandi, a Laidlaw Scholar at Tufts University, on his research: “Bacterial Growth and Survival Under Mars Simulation in High Perchlorate Conditions."

Entering a new space age, ambitions to venture out are at an all-time high. But with exploration, questions arise. The most prevalent one being: “Are we alone in the universe?” In the modern day, the search for extraterrestrial life has positioned itself at the forefront of space exploration. In fact, the day this Spotlight is released, the over 2 billion-dollar Mars Perseverance Rover will launch (if there are no delays) from Cape Canaveral Air Force Station in Florida, its prime intent being to search for biosignatures and survey the possibility of past life on Mars.

In 2008, the NASA Mars Phoenix Lander discovered Perchlorate Salt on the Martian surface. Knowing that microorganisms can stay in stasis in this salt, coupled with the past presence of water on Mars, leads to numerous promising possibilities and hypotheses.

My research examines the possibility of life on Mars and reveals where and how this life could thrive. Extremophiles, meaning “extreme lovers”, are microorganisms that thrive in extreme conditions, including the severe cold and radiation present on Mars. Astrobiologists believe that these organisms are the key to determining what kind of life could exist on Mars and how to discover it. My research focuses on two extremophiles, Chroococcidiopsis and Planococcus Halocryophilus, and their respective rates of growth when exposed to specific conditions with emphasis on perchlorate.

As plans for sending more rovers and, hopefully, astronauts someday to search for life grow, informative references regarding exactly where and what to look for on Mars are a necessity. Overall, this research will aid future Mars missions by adding to these references, thereby better preparing future missions to Mars. Carl Sagan once said that “Somewhere, something incredible is waiting to be known”. Hopefully, that incredible thing is on our next-door neighbor, Mars.

Ever since I was little, I’ve had an immense passion for Astronomy. I clearly remember having a miniature solar system next to my bed that I would stare at all night, along with an Astronomy encyclopedia. I was especially captivated by pictures of galaxies taken by the Hubble Telescope. The sheer size of the universe with its countless celestial bodies, while being scary for many, filled me with excitement and awe (and still does). To me, a whole colorful universe was just waiting to be discovered.

As I got older, I delved greatly into Biology, specifically evolution, the origins of life, and genetics. As time went on, I started to become more interested in the mechanisms of life and how we went from amino acids to humans in a relatively short time. As my knowledge in the field of biology grew, I gained an additional passion.

During high school, I continued my passion of astronomy alongside biology by watching shows such as Cosmos, listening to StarTalk Radio, and attending talks by notable Astrophysicists. At that point, I was introduced to a new field called Astrobiology, which perfectly combined my passions for both biology and astronomy. I realized that while discovering new celestial bodies is important, nothing would be more revolutionary to humanity than the discovery of extraterrestrial life. Given this, I decided that this would be a promising and fulfilling field for me to pursue. Attending University and finding a place to pursue this, I have never felt more at home.

The lab I work in consists of bright Astrobiologists working hard on their own innovative projects. Many projects revolve not around Mars, but other potential worlds instead, such as Enceladus, Europa, and Titan.

While researching Martian Simulant papers, I stumbled upon two small 2019 papers detailing how to create an Enceladus Interior Simulant and a general Europa Simulant. While these had nothing to do with my project, the lab’s consensus was that Enceladus Simulants were limited and Europa Simulants didn’t even exist. I decided to share the papers to simply add to our reservoir of knowledge. Shockingly, a post doc in the lab, and now a close friend, greeted them with enthusiasm. I was notified that these papers were unknown to the lab, allowing her to bolster her project and presenting new opportunities for the lab. Additionally, I learned that these newly discovered simulants could even be used to expand my own research. Given that I had simply stumbled upon these papers by chance gives the experience a rather cinematic vibe, paralleling that of discovering a treasure chest. Truly, it underscores that no matter your age or academic position, contributing to research and innovation is always possible.

Though it may sound cliché, the Covid-19 pandemic has presented numerous challenges above all. Due to the pandemic, undergraduates are prohibited from in-person research, but luckily, through this experience, I have come to learn many things:

With this approach, I am now writing an in-depth review article focused on the area of my research project while labs are closed to undergraduates. Currently in process, I realize how useful this review will be for future projects and providing reference for the long-term project. In fact, with all the knowledge I have gained from writing the review, I am in a far more informed position to continue in-lab research, once that opportunity presents itself again.

Being a Laidlaw Scholar means much more than simply doing research. It means having the opportunity to practise and develop useful leadership skills. It means being able to find an audience to share your research with, an audience that you may not have been able to connect to or locate prior. Additionally, it means gaining the recognition that you believe your project deserves.

What I have learned as a researcher in the past and present, is that the best leaders and researchers are those who make connections, get to know one another, share their projects but also learn from others. More than anything, being a Laidlaw Scholar means being part of a worldwide community spanning continents, allowing you to learn from those across the globe.

Dr. Carl Sagan, a notable Astrophysicist and Astrobiologist, has inspired me the most since I was very young. Going through history, the Enlightenment produced much of our cherished modern values, such as tolerance, open-mindedness, and democracy. But what is most interesting, is that the Enlightenment was sparked by the European Scientific Revolution. Indeed, it was from the social circles of scientists and innovators that the social values we hold on to today originate.

Carl Sagan showcased that you can indeed tackle numerous social issues in the modern day by applying a scientific mindset. Sagan displayed that science is just elaborated logic, and, thus, is a powerful tool to identify society’s imperfections. He believed in unity among all of humanity and promoted values of tolerance for one another. As he showcased through his famous The Pale Blue Dot speech, when looking at Earth purely as a planet, many of the social boundaries and intolerances we have created for ourselves are rendered illogical. My hope is that one day every scientist thinks the way Dr. Sagan did, and I believe that the scientific community can thus be a great force for social change.

The euphoric experience described by many Astronauts while on the International Space Station, looking at the Earth, has been coined “The Overview Effect”. In short, the Overview Effect is the realization of Earth as a unified force. It is reported that when experiencing the Overview Effect, the hatreds, divisions, and intolerances we have created for ourselves disappear, allowing for a more pristine view of who we really are.

I wish for a future where we, as people, look outwards instead of inwards. A future where logical scientific thinking has influenced us to become more progressive. Overall, I strive for a future where our space travel capabilities have progressed to such an extent that everyone can experience the Overview Effect and, thus, lead the way to a more inclusive, peaceful Earth in the process.

🎵 My quarantine anthem: Running Red Lights by The Avalanches

🌈 Something that made me feel joy recently: Recently, I read about NASA collaborating with the ESA and JAXA to create the 'Earth Observing Dashboard', monitoring the impact of COVID-19 on a global basis. This is a perfect example of how aerospace technology and space agencies can promote health and aid in deterring pandemics. Furthermore, in an era where it seems that isolationism is the mainstream, seeing productive international cooperation on a morally just project is very refreshing. Overall, simply reading about this new dashboard application and the steps taken to create it put a smile on my face.

News & Events, Ask Me Anything

Ask Me Anything: Dr Marianna Kapsetaki 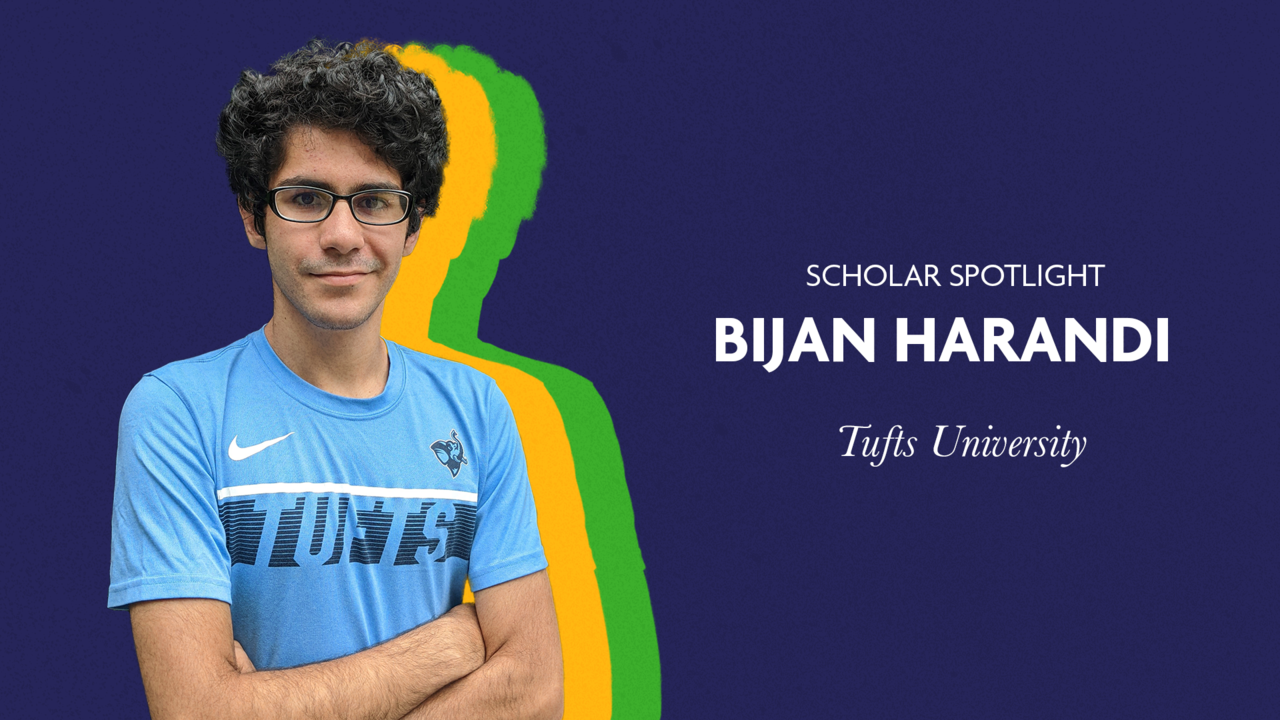