How to do research on a pandemic, during that pandemic – Reflections on my first four weeks of research

At the beginning January when I chose my prompt for the Laidlaw Scholarship application the pandemic looked a lot different than it does now. The first Pfizer vaccine had been administered several weeks before, the UK had launched itself into another months-long lockdown, and cases continued to rise throughout the world. At that point it was very unclear when, or even if, life would go back to what it was before all the chaos of the last year. Now, in June, life looks very different: as of august UK restrictions will be lifted, over half of the country’s population has received two doses of a vaccine, and international travel is beginning to pick up once again. While reopening and the introduction of widely accessible vaccines is an incredible feat, it has made my research this summer quite difficult.

Back in January I decided to focus my proposed project on examining the efficacy of vaccine distribution methods, identifying the benefits and drawbacks of national and international distribution models. At that time the COVAX vaccination program was still in its initial stages and most countries, other than the UK, had not yet announced how they were planning their vaccine roll-out. Flash forward three months and most wealthy developed nations had begun large-scale vaccination programs, with others quickly adapting similar models. Instead of utilizing the COVAX organization to distribute vaccines it slowly became clear that most nations had opted to secure advance purchase agreements (APAs) with producers, leaving COVAX with little to no vaccines to distribute. Come May most developed nations had been able to vaccinate large portions of their populations, cut down significantly on cases, and removed most strict lockdown restrictions within their borders. With these developments in mind, I started to reframe the project when I began researching earlier this month.

As I read more and more papers on vaccine production and distribution it became clear that literature on vaccinations had shifted away from the “how’s” and instead focused on the “why’s”. Why were the vaccines where they were? Why did some nations have doses while others didn’t? Why were some APAs fulfilled while others remained stuck in production? A large gap had begun to emerge between wealthy nations and the global south; the US and UK began reopening their economies while countries like Brazil experienced their second and third waves.

I had to sit down and completely reevaluate my research question to accommodate how quickly the situation had changed, choosing to instead focus on this new problem of vaccine nationalism. As it turns out a group of just 13 countries had managed to secure 60% of all those APAs from Pfizer, Moderna, and others. So, I have now spent the last couple weeks digging into the data, political situations, and history of this issue. With this new perspective I am hoping to produce research that can examine how these inequalities in vaccine distribution have manifested themselves in recent months and how we can best go about solving them.

This process has taught me a lot about the need to be resilient and patient during the research process. I think I became a bit comfortable with the quick turnaround time that comes along with essays during the semester; outline, research, draft, and done. However, I have had to retrace my steps, throw out research and re-write long outlines, which has been everything but a quick turnaround. But this has taught me about how much more “worth-it” the product becomes when so much continuous effort and energy goes into it.

As I begin to reach the final stages of my paper, I am also glad that I took the time to restart my project as it discusses a growing issue which mainstream COVID news has swept aside while we celebrate the return of pints and football. I think it’s important to begin to focus on the areas of the world where the effects of the pandemic will linger for far longer, to prevent the same mistakes made by the international community during the HIV/AIDS epidemic from repeating themselves. I am not sure what the solution to this growing vaccination inequality is nor do I think my paper will present all the answers, but I hope it will spur conversation about how these issues can be addressed in a timely and appropriate manner. 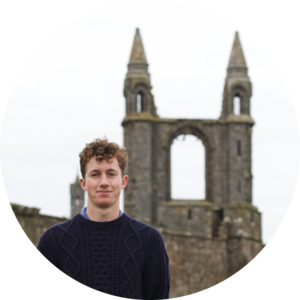 I am a third year Economics and International Relations major at the University of St. Andrews Scotland, interested in the intersection of political policy and economics. The majority of my research centers around utilizing structured economic analysis to bring new perspectives to social issues such as access to healthcare or education, both on a national and international level. I am originally from Berlin, Germany but currently live in Washington, DC. Outside of university I help run the St. Andrews Surf Club, DJ for music collectives, and play for the University's Men's 3rd Football Team.