My experience of the Creative Conscience lecture: Mental Health and Creativity

“Our society is broken”

Spanning over the course of four days, Creative Conscience, a charity that inspires and rewards creative thinkers to use their talent for positive social impact, held a series of events in three different London venues. The purpose of this event series was not only to raise awareness of the way in which creativity can be harnessed to tackle the environmental and social difficulties our modern society faces, but also, to actively encourage spectators to take matters into their own hands. I was lucky enough to win a ticket, through the Laidlaw Scholars Network, to the Wednesday conference that focussed particularly on combating the ever-increasing prevalence of mental health problems in today’s world.

Chrissy’s message was loud and clear. Our society is wounded, and we need to take initiative if we want it to heal. These wounds are bleeding and they are contributing to the growing prevalence of mental health illnesses and the rising suicide rates in the UK.

As the conference was held in the Design Museum, Bernard Hay, the museum director, gave a brief overview of the ways in which design, as a medium for creative expression, can positively or negatively impact mental health. He highlighted some of the problems that design can contribute to, such as visual saturation through overuse of technology and the often counterproductive effect of social media apps. Hay also drew our attention to the ways in which design has raised awareness and softened stigma around mental illnesses, and how apps like ‘Headspace” can serve to train and strengthen the mind. His introduction served as a catalyst to invite spectators to begin to think analytically about how the objects we use, spaces we inhabit, and media we consume can influence our mental health. But above all, Bernard’s opening words urged us to think about the way in which mental health, which is so often portrayed as an internal, private struggle, can and should be considered a public issue.

At the very heart of the conference lies an unfaltering belief in the transformative power of creativity. Speakers such as Marcia Mihotich challenged the preconceived ideas we might have about what creativity looks like and who it belongs to. “Everybody is creative” was reiterated countless times throughout the day and the very label of being a ‘creative’ was stripped of its elitist connotations and made accessible to all. Creativity was framed as a magic power, a potion with the capacity to heal our society, our minds and our planet. Chrissy emphasised that art should be used as a ‘tool to illuminate’ the obstacles and difficulties that we face. With regards to mental health concerns, shining a light on the obscurity that people often use to veil their inner fragilities is a particularly effective method of raising awareness. But beyond exposing the public to the problems we face, the magic essence of creativity lies in its ability to empower us.  Creating gives us tools, coping strategies, and weapons with which to fight these battles. We were all encouraged to take our own craft, be it writing, painting or knitting, and match it with creativity to solve the problems that threaten the world we live in.

Guest speakers Rosa Kim and Ben Akers shared their personal stories on how mental health challenges had interfered with their lives, and how they overcame these difficulties by creating projects that benefitted not only them, but also others battling with the same illnesses. When struggling with anxiety and depression during her time as an undergraduate graphic design student, Rosa Kim used her experience to create an online platform called, ‘Aware Online’: a safe space where students can openly discuss and share their difficulties. Similarly, Ben Akers felt compelled to make a documentary about male suicide after a close childhood friend of his took his own life. In order to encourage men to talk about their feelings, Ben hosted a series of screenings in local pubs followed by a discussion opening with his iconic line, ‘How are you, out of ten?’

Creative conscience made a clear effort to engage their audience and make them a part of the dialogue. We were not just listening to lectures, we were partaking in an extremely important conversation about how to use our individual experiences and our particular craft for social good.

Since harnessing creativity and craft to combat mental health problems can seem a bit complicated, here is some practical advice for budding creative conscience competitors:

Here are a few strategies for a creative flow: 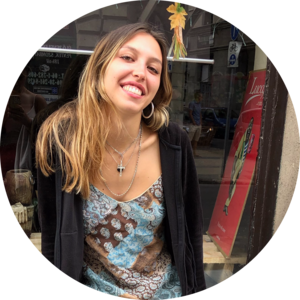 I am passionate about literature and foreign languages. I love creative writing, and hope to pursue a career in an artistic field. A lot of my research involved finding out about the horrific military dictatorships in Argentina and Uruguay towards the end of the 20th century. For this reason, I have become really interested in the notion of emotional trauma, how it can leave invisible scars on a population, and how it can haunt a nation. I'm also a huge fan of podcasts and hope to start my own one day! I'm in love with The Poetry Exchange podcast and the BBC Arts and Ideas!
Follow

Susanna Kempe (she/her)
about 1 year ago

Great update Chiara, thank you! Glad you got so much out of the event. Love the idea of creativity as a magic power. And you are right about bravery. The Goethe quote that "boldness has genius, power and magic in it", is one my favourites.