Reflections on the International Conference on Poverty and Sustainable Development 2019- Colombo, Sri Lanka

My refections on the importance of listening at the International Conference on Poverty and Sustainable Development.

In December 2019, I attended the International Conference on Poverty and Sustainable Development in Colombo, Sri Lanka. I was able to present my Laidlaw Scholarship research into poverty discourse in the UK and my podcast featuring underrepresented voices in the presence of activists, practitioners and esteemed researchers in international poverty. The conference included researchers and activists from around the globe who all came with presentations and opinions on how they understand and have attempted to aid poverty in their nation.

In 2018, I completed a cyber-ethnography using the social network platform Mumsnet.com to investigate how mums discuss poverty topics and the discourse that emerges. I used this data to exemplify how this discourse is important in social institutions (such as schools) and wider society. In devising the research project, I knew it would be incomplete without the voices of young people and marginalised communities. With this in mind, I created a podcast which practically showed the importance this discourse has to researchers, food banks, police, practitioners and young people. Ultimately, my research presentation endured for 20 minutes, with tech issues, a thought provoking Q&A and a very dry mouth. My presentation was a strike between what I knew could be understood and what I felt was important to share.

In the conference, I was 1 of 3 participants who came from Europe. The rest of the participants were from South-East Asia, East Asia and Southern Africa. As a poverty campaigner in the UK, extreme poverty in low and middle income countries is something that is often used to discredit the existence of poverty in the UK. My time as a campaigner in environments such as parliament has taught me that a valid excuse for doing nothing about poverty is that it will always be worse elsewhere, ignoring the irony that it was the Empire and colonisation that caused economic uncertainty and lack of resources in countries like Sri Lanka. When I was at the conference, one entrepreneur described the difficulties of actioning a bus route for rural impoverished people because of elephant stampedes, which is obviously not an issue we face in the UK. Through listening to the research, I understood that just because we don’t have these issues linked to overwhelming extreme poverty in the UK (although it does still exist along with relative poverty), it does not make our experiences of overused food banks, a dehumanising welfare system and negative poverty discourse any less important. If anything, it was important to hear how we all struggle with our versions of poverty, depending on the social environment, geographical context and political history of our countries. This is not a piece about the importance of *low and middle income countries listening to what high-income countries did right but in fact the opposite; that regardless of the economic position of a country, poverty still exists. Instead, we must take the research creativeness of low and middle income countries and apply them to the UK context to solve poverty symptoms.

The most important lesson I learned at the ICPSD is that conferences are not a soap box to talk on about your own perceptions or experiences. Instead, they are a place to have your outlook, rooted in research and have feedback from seasoned researchers and activists about how strong your research is. Bottom line, don not go to conferences thinking you have all the answers, go thinking you would like to figure out the answer together.

Although I took so much from this conference and my experiences in Sri Lanka, I hope my presentation can inspire seasoned researchers to involve young people in their research as stakeholders in an empowering way. I know that the conference has inspired me to continue developing my research into poverty in the future, using different methods to root my research in theory. It also allowed me to understand that we are all working on the same goal, trying in many ways to solve different outcomes of the same problem. Instead of working independently, we can work together to better understand the importance of each other's attempts at solving poverty locally, nationally and internationally.

If you're interested in the research I conducted and the podcast I created, check it out at www.deprivationdiscourse.com. 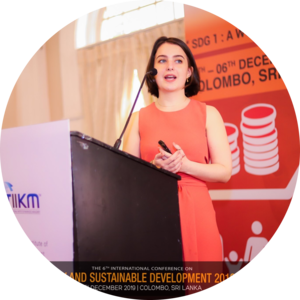 Since 2015, I have been passionate about ending poverty in the UK. I began my journey as a campaigner against poverty in my local area with Poverty Ends Now, a young person lead group ran by Children North East. Since then, I have represented the UK in the Commonwealth Heads of Government Meeting and other positions of influence with poverty as my main focus point. My Laidlaw Scholarship research project is all about the relationship between language, meaning and poverty. By understanding and changing unhelpful public discourse about poverty, we can start to shift power.
Follow
Laidlaw Scholars Network
We use cookies to help improve your experience. By continuing to browse our website you are consenting to our use of cookies.
Learn more