Lord Laidlaw has shared with you some of the secrets of his success; how he started and then grew IIR into a media powerhouse. When I went to work there I was 22 years and one month old. I had just returned from being a swimming counsellor at a summer camp in Vermont.

To say I was not prepared for the high performing culture of IIR was an understatement.

Our London office was a tiny, ramshackle place, up a rickety staircase just around the corner from Saville Row. You had to tell the person at the desk behind you when you wanted to get up to go to the bathroom so that they could move their chair in so you could move yours out.

The street is now prime real estate, packed with luxury stores. Every London IIR office I worked in was eventually pulled down and transformed into a glistening, gorgeous, new area. I really should have spotted the trend earlier and bought property wherever we had our seriously functional offices.

My first three managers were women. It never occurred to me that I wouldn’t go on to run something. All the leaders I saw were women doing just that. Ambition was a given. It was built into the fabric of our working lives. Each marketer (which I was) promoted 30 – 40 conferences a year – far more than our competitors who we thought were hopelessly unproductive. When any event achieved 100 paying delegates we would celebrate with Champagne in the office. Hard work and reward were what we did.

We were wildly competitive. Every year, Lord Laidlaw held a global manager of the year award which was the stuff of legend. The heads of each division went and competed for glittering prizes. One of my first bosses, was convinced that she was going to win. We had had an amazing year, success after success. In the days before social media, we waited for the phone call to hear what she had won – the rumour was that first prize was a luxury sports car. The rumour turned out to be true. Unfortunately, she hadn’t won. She was devastated – and, to be quite honest, rather cross. IIR was an open and transparent company. She asked Lord Laidlaw why she hadn’t won. Because everything you touched succeeded, he replied. She wasn’t much clearer. So? She asked. You obviously weren’t trying hard enough he said. Part of being a successful manager is taking risks. To really reap the rewards you have to be brave, make mistakes, learn from failure.

As a producer at IIR (a role I quickly moved into) you had to ask a lot of questions. At warp speed we had to learn a whole new sector, map the value chain, discover the buyer – seller relationships, uncover the current challenges for the buy side and put together a programme that would persuade the buy side to part with £1000+ to hear two dozen speakers, industry gods and blue chip companies, who we also had to recruit – learning enough about the topics of which they were global experts to put together a speech title and outline bullets for them to flesh out, that would convince them to speak and delegates to pay to attend.

Asking questions, is a key trait of successful leaders. David Gilbertson, the co-founder and CEO of Informa to whom we sold IIR, and for whom I would later go on to work at Informa and Emap, as CEO of Emap Networks and CEO of Emap’s leading brand, WGSN, wrote a best-selling business book, Wine Bar Theory, 28 Rules for Business, rule number 3? Keep Asking. Unless you ask: Why do we do it this way? Do we still need to do this? Is there a better way? You are doomed to live in the past or be overtaken by the competition.

I find it astonishing and beyond frustrating that so many people in all walks of life don’t ask questions. Or if they can be bothered to ask, don’t actually want to find the answers. Of all the many insanities surrounding Brexit, perhaps one of the most shocking was the staggering admission from one of the key proponents that he hadn’t realised how important the UK’s largest port was for the smooth running of British business and for its hospitals.

Why on earth hadn’t he asked before he campaigned to leave? A fundamental belief in the importance of research, primary data and recognising the existence of facts is one of the reasons why we sponsor undergraduate Research and Leadership scholarships. 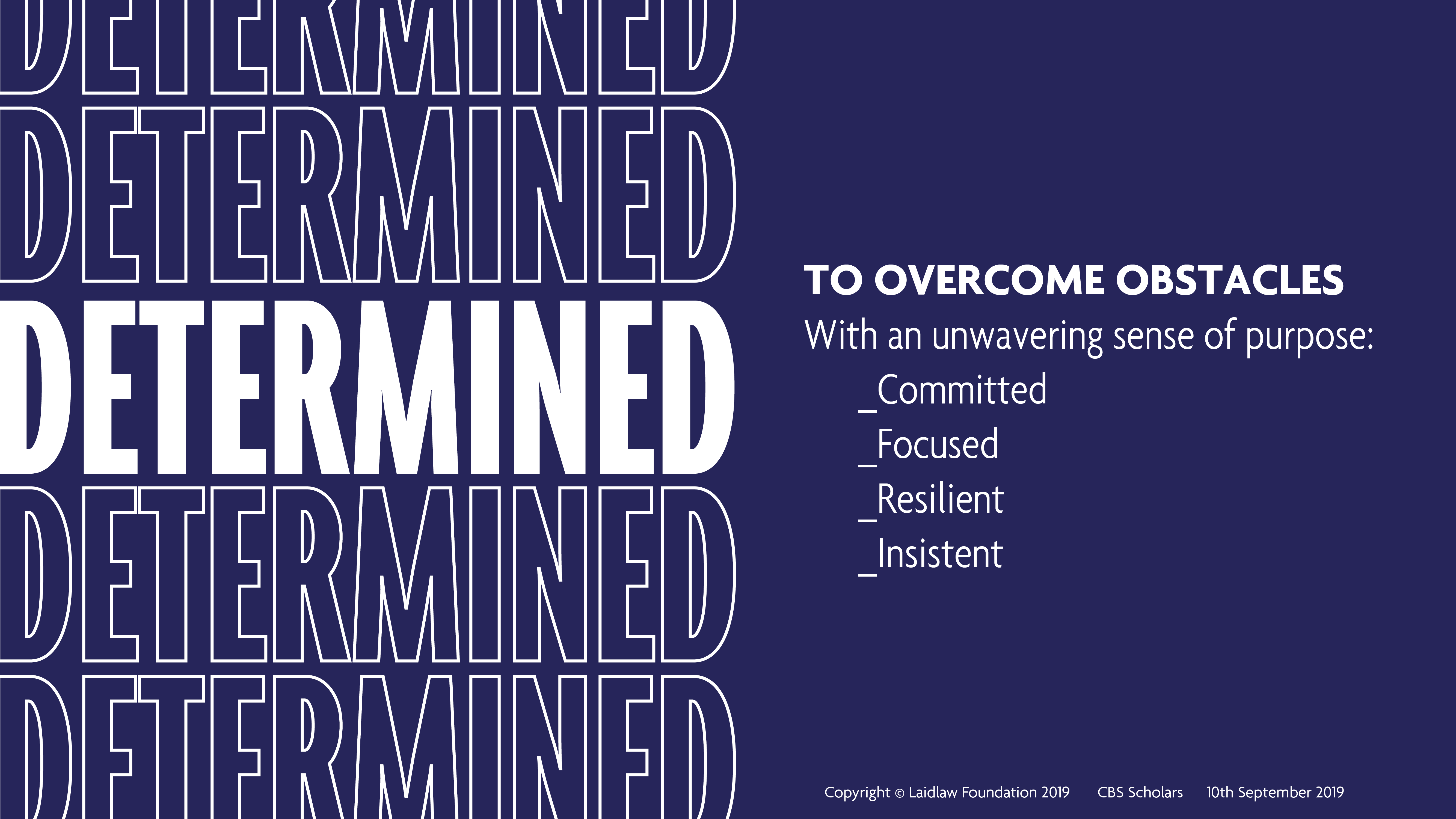 When inviting speakers for a conference, about one in four agreed to speak. After all, we weren’t paying them. So we spent more time being rejected then succeeding. We had to be determined.

Thinking about all of these things, ambitious, brave, curious, determined …it made me realise we had a set of values and behaviours that guided us and drove us. When I and my ex-colleagues, to this day talk of someone being an IIR Woman, it is really shorthand for these things.

The women I worked with were extraordinary. By no means cookie cutter. In fact, highly individual. They each stepped up and into leadership roles – often before they felt quite ready, because part of Lord Laidlaw’s success, as you have heard, was in retaining his top people – and keeping us on our toes – by always stretching and challenging us.

And everyone was seriously fast.

One of my many favourite Lord Laidlaw stories was his interview process for senior leadership roles. Allegedly, he would collect the applicant from reception and then walk them to a corner office. He walks fast. If they were still with him when he got there (and still speaking) then the interview continued. If not, he would very graciously tell them that it wasn’t going to work out and send them back to reception.

In discussing these leadership traits, someone mentioned that Fast is not necessarily a good attribute for women. Fast is seen as a pejorative. Certainly, in the 50s. I think perhaps it is time we stopped pandering to outmoded ways of thinking that hold us back. If we are constrained by ludicrous word associations, how on earth are we going to change the world.

Let’s reclaim Fast for ourselves.

Lord Laidlaw mentioned earlier the importance of being honest, of leading ethically. Integrity has to be the touchstone of the scholar.

So in creating a language of leadership, a set of values to guide you, I would urge you to consider these; to be ambitious, brave, curious, determined, extraordinary, fast and good.

As a Foundation, we invest in many areas of education: schools in disadvantaged areas...

...undergraduate research and leadership programmes at 14 universities around the world in order to develop a new generation of leaders...

...and business education scholarships for women.

As you heard Lord Laidlaw describe earlier, chasing winners is core to our DNA. We look at what is working and what isn’t. Do more of the former and cut the latter.

So your Scholarship comes with an obligation. Not only to get your MBA, but to show the world (and the Foundation’s auditors) that, armed with your MBA, you are going to succeed in reaching top level positions – and bring others along with you. That is why the Scholars Network is so important. One or two of you is not enough. If 80% of our CBS scholars go on to succeed in business, we can sit on 50% of the Fortune 500 boards. Then we have a movement and with it momentum and inevitable progress.

The Laidlaw Scholars Network to which you should have all now been invited is a Global Expert Community platform for Scholars, Supervisors, Faculty and Partners to Share Their Thinking, Connect with Each Other, Become Better Leaders and Pay it Forward.

It is place for you to dazzle, to stand out, to impress by sharing your thinking, where employers will come to search for the next gen leaders with smart ideas and a proven track record.

It is a place for you to continue your professional development. From each other, from thought leaders. Where you will find articles and top tips on how to succeed as a woman in business. Where there will be job postings and career opportunities. There is a private room just for CBS scholars. In it, you will find this speech. You can start conversations there that will only be joined by other CBS scholars, or you can post to the general site and connect with scholars from all over the world.

Most critically, it is a place for you to network. Looking for someone who can tell you about a particular company? Filter the membership directory. Looking for someone who has dealt with a similar challenge? Post a question or start a conversation. Moving to a new country and need some introductions, search the members. We are aiming to build a global network of scholars.

Archimedes said give me a lever… now imagine that we have levers positioned and connected all over the world. Think what we can achieve.

So be sure to use it well. Fill out your profile. Post your thinking. Connect with other brilliant women. Pay it forward through supporting other women with internships, advice and introductions.

The world needs to change. It is long past time to crack that ceiling in both executive and board positions. For the benefit of business and society, we depend on you to do it.