The Responsibility to Protect populations from mass atrocities

I am an alumni of the Laidlaw scholarship programme, which I was awarded in 2014 when I was in my first year of undergraduate studies at the University of Leeds.

I returned to Leeds last autumn when I enrolled to my PHD. I was awarded a scholarship from the Economic and Social Research Council UK to research the politics of international criminal justice, which is something that I’ve become very interested in because of the Laidlaw scholarship.

Looking back at the whole experience, I remember not feeling sure about what this thing was going to be. But now I feel like I’ve grown in the two year what others would in maybe 5 years. The entire experience is played on fast forward from a professional point of view. It really helped me take all my skills, ideas, ambitions and hopes to the next level.

The key skills that I took from the leadership component was really this ability to take people with me in the initiatives that I had in my mind and put these initiatives into practice. In the second year of my scholarship I founded the Responsibility to Protect Student Coalition at Leeds, later I founded the sole global, entirely student led journal on the responsibility to protect - the Responsibility to Protect Student Journal - which has received submissions from all over the world. I put together an amazing team of post graduate students from around the UK to help me create a platform where young scholars can discuss responses to mass atrocities but not only transitional justice, international criminal law, bringing a gender dimension to peacekeeping and peace-building, really a space where we can have meaningful and informed conversations about these important topics.

From the research project, really useful skills that I developed from very early on was my ability to critically engage with important issues. I think what’s unique about the programme is that they really invest in undergraduate students, and this has been very formative for me because it really opened my appetite for conducting research and further study, and this is why I chose to write my dissertation on the responsibility to rebuild. What happens when the international community decides to intervene in a place like Libya, for example, is there a responsibility to rebuild that society which has experienced mass atrocities?

The leadership component to the programme was delivered through a series of training sessions throughout the two years of the scholarship, with the entire cohort of scholars, we participated in days long programmes that developed our team working skills or communication skills through very practical and experience learning processes. So we really had the opportunity to develop these skills and practice them in front of professionals who were very carefully giving us very useful feedback to take forward with us. And I found it extremely helpful, because during these sessions it was then that I started having all these ideas about projects that I might initiate. It was helpful to know that if I identifed a gap in the skills that I needed in order to take an idea forward, I knew where to find the necessary guidance to do that.

I conducted research on a very important topic: the responsibility to protect populations from mass atrocities, which is a political agreement that world governments decided on in 2005. What they agreed to do was recognise that each state has the responsibility to protect its populations - not just citizens - from four crimes: genocide, war crimes, crimes against humanity and ethnic cleansing. During the two years that I was a Laidlaw Scholar, I conducted research on what is known as pillar 2 of the responsibility to protect. This is when the international community is helping another state whose populations are experiencing these mass atrocities to prevent or stop such atrocities, when the government in that state is willing to do so but unable to do so. I did research on the (ongoing) crisis in the Central African Republic. In my second year, conducted research on NATO’s intervention in Libya, and specifically  the UK's exit strategy after NATO's intervention in 2011. The outcome of that project was a co-authored document that I wrote with my supervisor - Dr. Adrian Gallagher - and was submitted to the British parliament to inform them on their enquiry on Libya.

I started the Responsibility to Protect Student Journal as a result of my Laidlaw Scholarship project. The Journal is a global, student-led, free online journal, which was founded in 2015. The journal aims to provide a platform through which undergraduate and postgraduate students can publish their academic work about the R2P and related topics, including international humanitarian law, human rights, and international criminal justice. 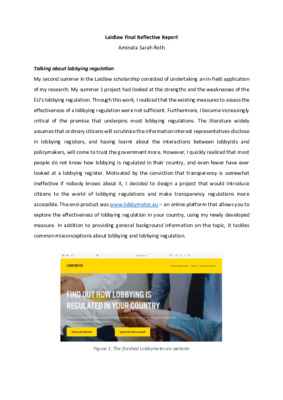