Self Doubt, Self Leadership

Having made it through five weeks of research last summer, crafting and revising reading plans, drafting and re-drafting (and re-drafting) a research report, I thought I would have finally learned the ropes of the Laidlaw programme. But from the first day of my Leadership in Action project, I realized that surprises and confusion are an inherent part of the experience of a Laidlaw Scholar.

My project is with a small NGO called Women’s Rights Initiative (WORI) Uganda. As their Sexual and Reproductive Rights & Health Intern, my job is to understand the impact of comprehensive sexual education on gender equality and girls’ education, research good practice by other NGOs, and come up with creative ways to improve the current curriculum.

It has been incredibly daunting to come into an organization which has accomplished so much for women and girls in Uganda. After my first meeting with my supervisors, I felt so lost that I didn’t even know where to begin asking for help. I spent the whole week reading research on similar NGOs and their curricula and taking notes on everything I read, not knowing what would be of value and what might be extraneous. I wanted to tackle the entire body of literature in this first week, but ended up becoming very overwhelmed with the idea that I might be wasting my time, that I was getting completely sidetracked. I took on a little creative side-project, since my supervisors

had mentioned the possibility of making a short, animated video on menstrual health that could entertain and educate young girls. They asked for the video to propose a scenario, in which a young girl has difficulty talking to her parents about her period and experiences feelings of shame and embarrassment at school, but learns through educators and community leaders like those trained by WORI that she has the right to an education and safe menstruation, and the stigma surrounding her period should not get in the way of this.

I drafted a script and drew a storyboard, and presented it to my supervisors alongside a summary of the more formal research work I was doing. It happened to be a really suitable component to my project plan, because Uganda went into lockdown this past week, meaning that students will not be in school. Young people will be spending more time on social media and at home, so something we can publish digitally is a priority right now. I was so relieved to hear that I was on track, if not ahead of my proposed plan. My supervisor gave me positive feedback, and our meeting gave me some clarity as to what these next two-and-a-half weeks might demand of me.

I only wish I had asked for help sooner, that I had not spent my first week in such anxiety of incompetence. I realize now that this project is supposed to test my creative capacities, and that even though I prefer to have a very set, straightforward list of concrete tasks, I won’t always receive that from the start, as not everyone operates as I do. I can, however, make this kind of list for myself. An incredibly important part of leadership is self-leadership, which requires knowing how I work best, and figuring out where I have the ability to make room for my skills to flourish. 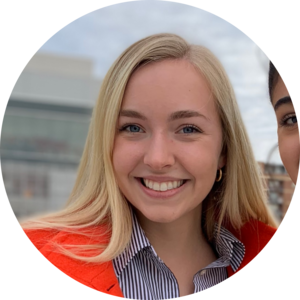