individualism, indifference, immorality: is this life in the ‘modern city’?

My project began with a few poems and a rabbit hole. Down the rabbit hole was, of course, my Laidlaw research project. From the poetry of T. S. Eliot and Charles Baudelaire, who share the muse of modern life, especially that of the city, I was pushed to question what these poems tell us about how we experience our cities as individuals today, how the city shapes our experience and how we shape the city. Since the 1960s, Urban Studies has been increasingly about exactly that- the experience of individuals, and how space, or Urban Design, shapes that experience. Moreover, essential to our experience is our urban psychology: the effect of the metropolis on our mental life has been a hot topic since the early 1900s. As of 2018, a study by the UN showed that 55% of the world’s population lives in cities, the same study estimated that this would grow to 68% within the next few decades.* The majority of us grow up and live in cities; it is becoming increasingly important that we understand them. In this way, a few poems on the ‘modern city’ opens the door to studies of Social History, Urban Studies, Urban Design and Psychology in the hope that a greater understanding of literature and history can help us better understand our own position in the modern world.

The Waste Land by T. S. Eliot is an infamously unintelligible, ‘hard-to-read’ poem: my old English teacher once told me that it’s “best to start by reading it backwards”. Despite this unfortunately off-putting reputation, I believe that there is something for everyone in The Waste Land. Set in London, where I’ve lived my whole life, the poem traces the sights and sounds of the city. Written in the wake of the First World War, Eliot speaks of an increasingly isolated society and the sense of being lost and uprooted in the commodity culture of the modern world. The poem is concerned with both literal waste lands (city slums and sterile spaces) but also cultural and moral waste lands, especially the modern city, which is viewed as a hotbed for economic disparity, sexual, emotional and spiritual disaster. At the time of its publication in 1922, initial reviewers were baffled by the poem and immediately recognised it as a break with the poetic conventions of the day. The extent to which this is true resonates strongly with us now, since almost 100 years down the line we still consider it to be a leading work of modernist literature.

On reading about the foundation of the ‘modern city’, one becomes increasingly aware of the role of authoritarianism. It all began in Paris, 1853, when over the course of two decades the medieval city was almost entirely demolished, including the homes of Parisians who had lived there for generations, provoking a movement of mass displacement which sent poor people to the outskirts of the city – ‘les banlieues’. Napoléon III’s elaborate architectural aspirations to create the ‘Rome’ of the French Empire meant redesigning space for social control, creating the wide boulevards and monuments of the Paris we know today. Baudelaire was writing during this era of demolition and transformation, mournfully documenting the process of modernisation: ‘Paris change! mais rien dans ma mélancolie/ N'a bougé !’ (Paris may change, but in my melancholy mood nothing/ Has budged!)* For Baudelaire, Paris has been made into an anthill of identical rows of bourgeois apartment blocks. 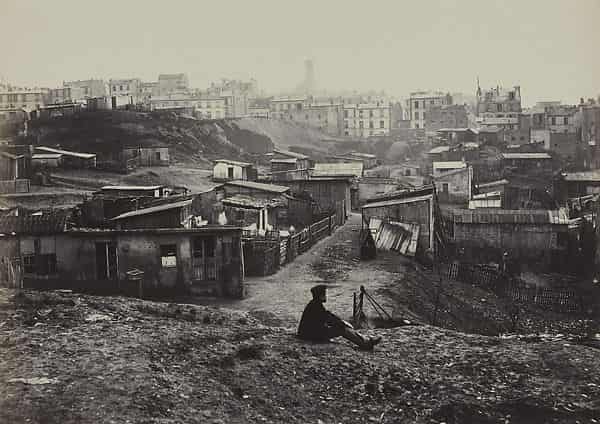 This photograph, taken by Charles Marville, captures a shantytown from the 1860s and 1870s, as the working poor were forced to move out of the inner city. It quite clearly demonstrates the harsh treatment of the poor for the sake of the wealthy, creating a powerful image of abandonment and isolation.

Being able to take this time to study from a plethora of academic fields, exploring the disorientating experience of individuals in rapidly changing urban environments, (with all the social and economic upheaval that it entails), has been an incredible lesson in research for me. Personally, it’s easy for me to feel I’m not doing ‘enough’ when it comes to researching a project which by nature is broad and has the ability to go in many different directions. However, the past five weeks have taught me an important lesson in self-leadership: being able to be compassionate for yourself, particularly in the context of a global pandemic. I am extremely grateful to the Laidlaw team for their time and energy, and to Lord Laidlaw for his sponsorship.

* The Flowers of Evil: A New Translation of Les Fleurs du mal [by Baudelaire]. Translated with Notes by James McGowan. (The World’s Classics.) Oxford and New York: Oxford University Press, 1993.