Does Free Will exist in our Universe?

For eons, humanity has attempted to predict the future; the quality of harvests, rising of the sun, fates of voyages. Our most successful endeavor into this art of prediction has been science. Right up until quantum theory threw a spanner into our well-defined, logic-obeying working models, that is.

The Physics of Free Will

Dawn. You wipe the sleep from your eyes and peer out from the hut. Will the prophesier be successful in their prediction of this year’s harvest? Worry scurries fleetingly through your mind but you have faith in the prediction and move about ready for the day’s work [1].

Predicting the future has always been important to humans for our survival and comfort. Over millennia our methods of prediction have become more refined, only since renaissance times has the scientific method really taken off and we have put our faith in something a little more reliable [2].

Classical mechanics allows us to make predictions about the future. The future state of a system, that is, an environment with things in it, can be accurately predicted thanks to a few physical laws that describe how things interact. We know for example that an ice-cream cone will melt if left alone and this due to the laws of thermodynamics. Equally we can accurately predict the position of the moon and stars millions of years from now largely thanks to Newtonian gravity. In fact, if enough information was known about a system, we could predict its future state any length of time in the future. Applying this same logic to the biggest system we have to play with, could we predict the ultimate fate of the universe if we had all the necessary information?

Picture this: we stand at the moment before the Big Bang. Everything is in place, we know what is about to happen, the Prime Mover holds readily on the cusp of existence and, bang! The universe is set off in rapid motion in a flurry of happening. Having just witnessed creation itself, being in the wiser of how things were kicked off, we could apply our handy laws of classical mechanics and predict how the universe would evolve from here. Excellent, there’ll be no more sneaky solar flares or earthquakes to dodge in a few billion years then. No more of anything we didn't see coming. Nothing left to chance ever. Pretty bad news for bookies.

Since the universe has been reduced to a wholly predictable beast one may start to wonder, why? Why has the universe gone to the trouble of existing if everything that will happen is known at its beginning?

Purley as a demonstration of capability perhaps? Seems a touch unnecessary doesn't it? These thoughts perhaps crossed through the minds of the assembly of physicists at the 1900 British Association for the Advancement of Science when Lord Kelvin (of temperature scale fame) proclaimed “there is nothing new to be discovered in physics now. All that remains is more and more precise measurement” [3].

Little more than nine years later Einstein would rock the scientific community’s world beyond restoration to this former assuredness [4]. Einstein's theory twinned the earlier work the experimentalist Thomas Young, who showed light behaves as waves, and Max Planck’s proof of particle-like, quantized light, to form the idea of wave-particle duality and fundamentally change our understanding forever. Wave-particle duality is the concept which requires the understanding of light as having properties of both waves and particles at the same time [4].

The explanation for describing things we’d usually attribute a fixed point-like position, rather than a spread-out position, is down to our observation of the object. Before observation, the object behaves as a wave is in a state of superposition (combination) of all its possible (physically allowed) states at once. After observation the particle solidifies its position.

Be wary also of language used when discussing quantum mechanics. ‘Observation’ affords rather a personalized relationship with the quantum which can lead to many misconceptions and Woo mysticism [7]. Observation in a purely physical sense means the impartation of some information about a system. Once the information of the system has been tampered with, a record of its state has been made and therefore the wave function must collapse at this point of “observation” that is, information recording.

Anything that can Happen does Happen

With the invention of the wave function the world was introduced to the mechanics of quantum objects and thrown into a renewed state of wonder as the road to quantum theory was paved. The two most hotly discussed interpretations of quantum theory leave us again in either a universe that already knows our fates and the future of everything else in it, drearily playing out for no humanly obvious reason, or, somewhat more excitingly is left entirely to chance.

If the Many Worlds interpretation is true then the universe we inhabit is just one strain of an infinite multiverse of quantum decisions where anything that can happen does happen [6]. This is the idea that wave functions never collapse, simply the universe can’t make a choice and whenever there’s a quantum decision to be made the universe splits into two, where almost identical timelines run parallel and where the decision is made conversely in each universe [4]. This happens whenever there’s a decision to be made. This means choosing an electron’s spin every time it interacts, never mind choosing just one flavour ice cream (and you thought you were bad!).

Since the greedy universe never actually decides which path to take and instead spawns an entire new reality at every chance, us lowly inhabitants have our fates chosen for us and have no influence over where the fractling universe will take us next [5]. An individual branch of the universe occupies every strand of decision making meaning anything that can happen does happen! [6] In the most literal sense the multiverse of realities encompasses every possibility. Even universes where you strut your stuff down red carpets or win the Nobel Prize or (in the really bizarre ones) where the buses do run on time!

This also leaves us facing a reality where everything was always bound to happen. Perhaps the excitement of winning our four Grammys is sapped a little when we realise it must have happened in at least one universe and more likely in a small infinity of them.

Alternatively, in the Copenhagen interpretation the universe is less of a control freak. Existence itself is continually evolving and changing its course as we surf the ever collapsing wave function of all things [5]. Here the multiverse is much more conservative of its alternate realities and does finally give us a universe in which we have control over our fates. It depends entirely on the evolution of the countless wave functions within it [5]. Here, particles do make decisions and their states are firmly fixed. When a particle interacts with its surroundings the wave function collapses and one of its possible states is randomly selected from the distribution of possible states [5].

Experimental evidence shows us that quantum objects such as light particles (photons) really do exist as wave functions before we observe them [4]. This means it's not possible to predict the state of the particle after it's been measured. We only know its state the instant we observe it, after that its wave function continues to evolve in a probabilistic manner.

This interpretation means that there is likely only one universe of our type and the narrative that plays out in it is much more novel. Here there really is only one outcome from decision making and the decisions on which our lives are built are quantum and entirely probabilistic. Once again, free-will has been restored to the galaxy and we all may live in choice.

So which flavour of quantum mechanics governs our universe? Do we live just one of an infinite number of timelines where anything that can happen does happen, or are we on a solitary journey travelling through time on the whim of quantum interactions? For now, the jury is out and you are free to choose your own interpretation.

6. Cox, B. and Forshaw, J. 2011. The Quantum Universe: Everything that can happen does happen. London: Penguin Group.

Modified from Morelas, A., 2018. On free will: Daniel Dennett and Gregg Caruso go head to head. [online] Science of Singularity. [Accessed 26 March 2021]. 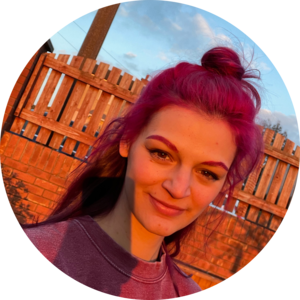 High in the sky with ambitions in conducting inspired research to help uncover cosmic mysteries, and launch something (me) to space. Will also travel the globe at a moment's notice. 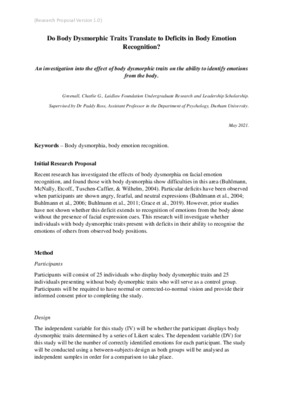 Charlie Greenall
Research Proposal: An Investigation into The Modulation of Working Memory and Its Neural Representations
Members Only Proposal Neuroscience Psychology
STEM

Research Proposal: An Investigation into The Modulation of Working Memory and Its Neural Representations 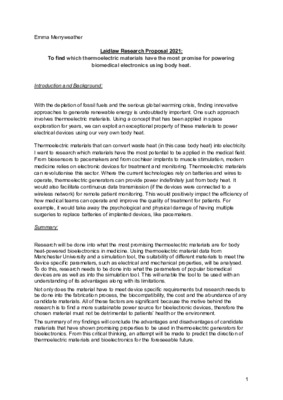 Emma Merryweather
Laidlaw Scholars Network
We use cookies to help improve your experience. By continuing to browse our website you are consenting to our use of cookies.
Learn more