As the second largest body of ice on Earth, the Greenland Ice Sheet (or GrIS) stretches over 1800000 square km with an average thickness of 1500m. Covering over 80% of the surface of Greenland, it’s estimated that if the ice sheet melted completely, global sea levels would rise by 7.2m. Trends in retreat and advance at the margins of the ice sheet have been observed and inferred by researchers, using ice cores and sediment samples to recreate historic conditions. Microfossil content within the ice cores is often a useful indicator of past oceanic and glacial environments. In particular, identifying and classifying foraminifera from the samples then comparing their modes of life (whether they lived on the ocean floor or were suspended in the water for example) will help build up a picture of the habitat they evolved in. Combining these observations with samples from other localities enables us to map out the trends in historic marine environments, especially in relation to the presence or absence of warm ocean currents at the ice sheet borders. Warm currents like these are particularly relevant to plotting future trends in Greenland’s erratic environment. Around 6000 years ago, a thermal maximum in the Holocene led to increased air and water temperatures, thought to be comparable to global predictions for around 80 years’ time.

In recent years, an acceleration in ice sheet retreat and thinning has been observed in Greenland’s tidewater glaciers. Atmospheric and oceanic conditions, in addition to the internal dynamics of the ice sheet itself, are all thought to be contributing factors to the glacial retreat from marine borders. In particular, dynamic processes where the sea meets the glacier, such as current advection across shelf to glacier fronts, are the driving forces behind this shift. The warmer the ocean currents reaching the glacier margins, the more dynamic the retreat of margin ice recorded and the further the surface mass of Greenland shrinks. By looking back at the pre-history of areas like northeast Greenland (or NEGIS) in the context of warm water flow mechanisms, we will be able to collectively draw a clearer picture of the consequences of the current warming trend we find ourselves in.

NEGIS is an important sector of GrIS, since it controls the ice flux into the NE Atlantic Ocean, yet areas of it remain relatively unstudied. It appears increasingly likely that NEGIS underwent large-scale retreat during the Holocene Thermal Maximum, a period of geological history from 6-7Ka during which air temperatures were at a comparable level to predicted 2100 conditions. In fact, it is now thought that one of the NEGIS ice shelves (referred to as 79N) retreated over 100km during this time. Therefore, the research question for this project is as follows: what can sediment samples from NEGIS reveal about the effects of global warming on the Greenland ice sheet retreat?

In analysing the spectrum of marine fauna trapped within these sediments, this project aims to:

- Constrain the sea-level change with respect to the oceanographic and atmospheric conditions experienced by NEGIS during the Holocene;

- Reconstruct past activity in NEGIS to correctly calibrate ice shelf-stream models for 100 to 1000-year timeframes;

- Validate what level of sensitivity of such models is necessary for more precise future predictions.

Work on the sample sediment will be carried out in the Department of Geography and will fit in with the work done on a wider sample size of sediments sourced from across the NEGIS area. This region notably displays forcing mechanisms over timescales which are long enough to remove any shorter-term ‘noise’, something which is not possible when evaluating contemporary fluctuations alone. As the largest ice stream in Greenland, NEGIS therefore offers a special window into both the area’s past and future, and hence into the past and future of multiple ice melts in the Arctic circle.

To summarise, by analysing the microfossils contained in oceanic sediment cores from the North East Greenland ice stream, a picture of historic marine and glacial environments can be built up. It is fundamental to establish the causes and impacts of previous ocean warming events in order to best prepare for a future that may require more rigorous coastal defence policies and precautions against habitat loss. After completing this project, it is hoped that it will be possible to extend analysis to longer gravity cores of sediment, quantify specific temperature changes by analysing stable isotopes, and use carbon dating to improve the chronology of previously simulated models. 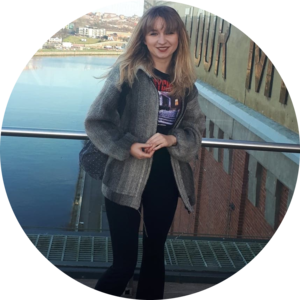 I'm a second year undergraduate studying Natural Sciences at Durham University with an interest in climate change, sustainability and environmental studies. My Laidlaw research project involves reconstructing historic ocean environments on Greenland's east coast to better predict sea level changes over the next 100 years.
Follow
Laidlaw Scholars Network
We use cookies to help improve your experience. By continuing to browse our website you are consenting to our use of cookies.
Learn more